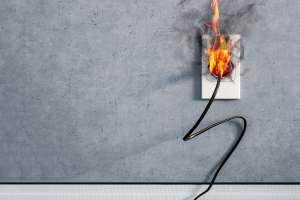 Your electrical system is vital to the functionality of your Jensen Beach home. However, if not properly installed and maintained, it could become a detriment to your home instead. In fact, in some cases, ill-prepared electrical systems can even cause fires.

Fortunately, there are things you can do to ensure that this doesn’t happen. Without further ado, here are five methods of preventing electrical fires.

Unfortunately, because they’re not grounded, they allow for electrical malfunctions to result in the form of sparks, overcharges, and electrical arcs. While they don’t always, all of these entities can result in house fires.

Wondering whether you have ungrounded outlets in your home? It’s easy. Just look for the outlets with two holes instead of three.

2. Minimize the Use of Extension Cords

Extension cords certainly have their place. However, they should never be used as a substitute for permanent electrical wiring. Why? Because in the wrong circumstances, extension cords can be fire hazards.

This is particularly true when extension cords are frayed or overloaded with appliances. Exposed and overloaded wires are at risk of sparking, meaning they’re also at risk of starting fires.

3. Resist the Urge to Overpower Outlets

One of the most common electrical mistakes that homeowners make is forcing an excessive number of electrical appliances into a single outlet. This always, without fail, creates a fire hazard.

Now, this isn’t to say that you can’t put more than one appliance into a single outlet (via power strip, extension cord, or otherwise). It’s just to say that you should probably keep the number of appliances at eight or fewer.

The exception here is big items such as refrigerators and oven ranges. Because these appliances make use of so much electricity, they require a dedicated outlet.

Failure to abide by these guidelines could very well result in a house fire. By overloading an outlet, you create a spark risk, thus creating a fire risk.

Over time, as they’re subjected to more and more wear and tear, electrical cords can start to fray and rip. This fraying and ripping can expose the metal wires within these cords, all of which are used to transfer electricity from one area to another.

When these metal wires become exposed, they become an immediate fire hazard. While they aren’t necessarily going to cause a fire, any electrical inconsistency could cause them to become overloaded, resulting in a spark that could eventually cause a fire.

To keep your electrical cords from becoming fire hazards, it’s important that you keep an eye on them. If they’re fraying or ripping, you’ll want to replace either the cord or the appliance itself.

If you want to ensure that your home’s electrical system is fireproof, it’s recommended that you have it inspected on a regular basis. Licensed electricians are well-versed in fire code and will be able to point out any trouble spots that exist within your system.

If your Jensen Beach electrician notices any problems with your electrical system, he or she will be able to perform the repairs needed to fix it.

Hire a Jensen Beach Electrician to Help Fire-proof Your Home

Looking to fireproof your electrical system? In need of a Jensen Beach electrician? All American Air & Electric is the company to call.

Our team of electricians has helped countless homeowners throughout the Jensen Beach area. If you’re looking to make your home as safe as technologically possible, we can help.