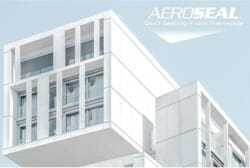 Aeroseal is a non-toxic, high-performance material that can be used to easily seal the air ducts and vents in your residential, commercial or industrial building. It offers a great way to reduce energy spending, extend the life of your HVAC equipment and fix general venting issues. In fact, most commercial and industrial buildings exceed the recommended leakage rate by at least 20%, according to a study by the Lawrence Berkeley National Laboratory.

Problems related to the duct system can affect both old and new buildings, and these problems may include increased airflow due to leakage, improperly sealed ducts, and damaged sealants due to thermal pressure and temperature cycling. Generally, ductwork issues are very expensive to solve because accessing the ducts is difficult. However, Aeroseal is the most advanced duct sealing process in the industry today.

How Does it Work?

The Aeroseal process starts with an in-depth analysis of the duct system in order to determine the extent of the leaks. Once the analysis is complete, the vent diffusers are temporarily blocked, and sealant is pushed through the system. Since the vents are blocked, the air can only escape through the leaks in the duct system. This pushes the tiny Aeroseal particles through these holes, and they build up until the holes are completely sealed. It’s important to note that this process does not coat the ductwork.

After the sealing process is complete, another diagnostics test is performed and compared to the initial assessment in order to determine the ducts’ current amount of leakage and ensure that the Aeroseal was successful. It’s worth mentioning here that the Department of Energy has declared Aeroseal as one of the best energy technologies currently available for American consumers.

The Aeroseal Duct sealing Decision, From a Financial Perspective

Duct leakage can have a considerable impact on your bottom line:

With our diagnostics process, we are able to provide several important data points—such as the overall leakage percentage of the building, the impact it has on your bottom line, and how much you stand to benefit from sealing the ducts. By taking into account the estimate operating hours, your local utility rates, and several other inputs from your utility personnel, we will be able to showcase the ROI of the Aeroseal process, the benefit-to-cost ratio, and the simple payback. At the end of the day, all of this will make it a lot easier to make an informed, profitable decision. If you’d like to find out more, contact us today!