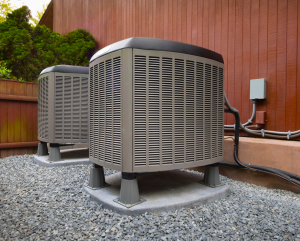 Wondering how it got to where it is now? Then read below. We’re going to review the short, but rapid-moving history of air conditioning.

Before air conditioning was invented, civilizations utilized all kinds of methods to keep their homes cool. In the prehistoric times, individuals would harvest ice during the winter and use it during the summer. This practice actually lasted for centuries, dying out around the time the ice maker was invented in the 19th century.

The ancient Egyptians utilized moistened reeds, hanging them from their windows and taking advantage of the humidity that they created. This practice was especially useful in their desert climate.

In the 2nd century, the Chinese invented a rotary fan, which created an air conditioning effect. It was widely used as recently as the 13th century.

The concept of air conditioning sprung about in 1758. Benjamin Franklin and chemistry professor John Hadley experimented with evaporation as a means of creating a quick cooling effect. What they found is that it was, indeed, possible.

In 1820, English scientist Michael Faraday utilized ammonia to demonstrate Franklin and Hadley’s concept. In 1842, Florida doctor John Gorrie put the concept into action, utilizing it to make ice in order to keep his patients cool.

Gorrie had plans to improve upon and industrialize his invention. Unfortunately, his funder died before he was able to do so.

The Conception of Air Conditioning

Electrical air conditioning made its first appearance in 1902. Invented by American Willis Carrier, it was originally conceived to control humidity in a publishing company’s printing warehouse, ensuring that the company’s printing machines were able to perform consistently.

It turned out that his invention also provided a cooling effect, though this would go largely unappreciated at the time. Nonetheless, Carrier’s invention was a success, eventually prompting him to open The Carrier Air Conditioning Company of America in 1915.

The Growth of Air Conditioning

At first, air conditioning was used solely in commercial properties. However, it wasn’t long before it was being installed in residences as well. The first known case of residential air conditioning occurred in Minneapolis, Minnesota in 1914 at Charles Gates’ residence. It would spark a desire for air conditioning in homes throughout America, but particularly in areas with warm climates.

By the 1950s, air conditioning was seen as a standard in most homes throughout the country. While not every residence in the United States had air conditioning, most homeowners sought to establish it.

Along the way, air conditioning was instituted in a variety of different ways. For instance, while central AC was first established in the 1910s, portable window ACs were invented in the 1940s. The portable AC, in particular, was vital in delivering air conditioning to the middle and working classes.

What differs is the energy efficiency of these systems. They utilize much less electricity than they once did, saving homeowners a great deal of money that they once would have spent.

Are you interested in repairing or installing an air conditioning? Looking for air conditioning installation or repair services in Tequesta? The HVAC specialists with All American Air & Electric are the people to see.

Our team has installed air conditioners in thousands of homes throughout Tequesta and its surrounding areas. Whether you’re looking to install central AC, a ductless mini-split system, or otherwise, we have you covered.