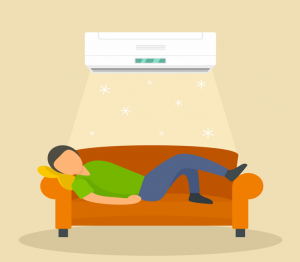 Spring has arrived. It won’t be long until the extreme heat descends upon Port Salerno. In other words, air conditioning season is just around the corner.

If you want to get the installation process out of the way as quickly as possible, you will be very pleased with ductless air conditioners. Because they don’t require the use of ducts, they can be installed in a relatively short amount of time.

All that’s required for the installation is to cut a hole in the wall, mount the air conditioner, and mount the condenser. It’s not all that different from installing a window AC—it’s just mounted on the wall instead of on a window sill.

Cost-effective as a Single-room Solution

If you’re only looking to cool one or two rooms in your home, ductless air conditioning would be the most cost-effective and energy efficient option.

Ductless ACs, on the other hand, don’t have this problem. This is because each individual unit covers one room and can be programmed to produce any temperature you desire.

Ductless ACs are not maintenance-free units. However, when compared to central AC systems, they require very little maintenance. Generally, all you’ll have to do with a ductless AC is change its air filter and clean its coils. You won’t have to worry about removing debris or cleaning out air ducts.

Functionally speaking, ductless air conditioners are wonderful. Aesthetically speaking, however, they can be a bit of a problem. This is because, in order to run a ductless AC, you must mount its big, bulky blower on your wall.

In contrast, central AC systems only require that you install discrete, metal vents.

Expensive as a Whole-House Solution

While ductless ACs are cost-effective as a single-room cooling solution, they can be very expensive as a whole-house cooling solution. This is because, in order to cool a whole house without any ducts, you would have to have a number of ductless AC units installed.

Are you looking to install air conditioning in your home? Interested in installing ductless air conditioners in Port Salerno? If so, All American Air & Electric has you covered.

As Port Salerno’s premier air conditioning installation company, we have installed ductless air conditioners for countless customers over the years. Regardless of your air conditioning needs, our team of licensed and highly-skilled HVAC technicians can accommodate you.

Contact us now to get the installation process started!